Vodacom breaks the 2Gbps barrier on its commercial network 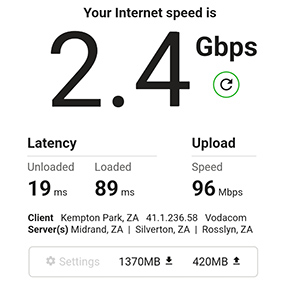 05 October 2022. Vodacom has achieved 2.4 Gbps throughput on a live site - a first for South Africa. The trial made use of a commercial smartphone and was conducted through the commercial base stations which serve Vodacom’s Midrand campus. The record throughput speed is approximately 100 times faster than the average fibre-to-the-home connection.

Beverly Ngwenya, Vodacom South Africa Technology Director says “This achievement demonstrates Vodacom’s continued innovation as a 5G technology leader and a Network of Firsts, showcasing how fifth-generation mobile technology can unlock incredible fibre-like experiences for users on the go, or where fibre installations aren’t feasible.  Most notably, this is a preview of how Vodacom’s recently acquired spectrum will enable true 5G capabilities and raise the bar on network performance.”

With the combination of 5G technology and the correct spectrum, Vodacom can significantly increase the performance and capacity of its network. Ultra-high speed will enable a number of 4IR use cases, while consumers will receive even better-quality services.

Ngwenya says “Vodacom is a future-ready business that offers multiple fixed and mobile connectivity solutions to our customers to meet their specific needs. A 5G fibre-like service is a complementary addition to our existing portfolio of services, giving customers more choice in how they connect for a quality network experience.”