Could you be a 2022 Vodacom Journalist of the Year Award winner? 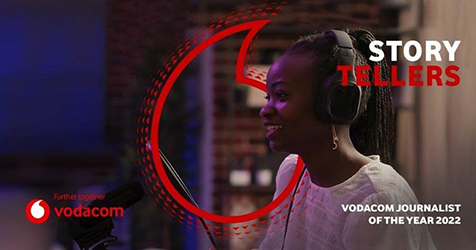 South African journalists can begin preparing their best work for review by the Vodacom Journalist of the Year Awards (VJOY) judging panel, competing against their peers for top honours in one of the country’s most prestigious media awards. The 2022 VJOY awards will open for entries on 16 August, closing on 01 September 2022.

After five years of sterling leadership as convener of the judging panel, Ryland Fisher has stepped down and Mapi Mhlangu, eNCA's former Managing Director and Editor-in-Chief, has ably stepped in to fill his shoes. Mapi is credited with expanding eNCA’s leadership position despite the arrival of two competing news channels during her time at the helm. She holds an MBA from Henley Business School and is a Bloomberg Ali media fellow and Duke University Menell Media Fellow. Now the Managing Director of her own agency, Mapi brings her newsroom experience as well as her academic studies to lead the judging panel.

The national awards ceremony will adopt a hybrid approach. The 2022 theme is ‘Storytellers’: Journalists act as watchdogs in our society, seeking to report the stories of our time and holding power to account. The VJOYs pay tribute to these remarkable men and women.

Takalani Netshitenzhe, Chief Officer for External Affairs at Vodacom South Africa says “Judging the Vodacom Journalist of the Year Awards is no easy task; it requires a significant time commitment and many years of media experience. On behalf of Vodacom, I would like to thank Ryland for his extraordinary efforts in expertly guiding our judging panels over the years.

We are proud of our esteemed panel of VJOY judges, who themselves have earned many accolades as seasoned media professionals. We extend a warm welcome to our new convener Mapi, who we know will do an excellent job in taking the competition to even greater heights.”

VJOY Convener Mapi Mhlangu says “Journalism remains an important component of our democracy. Now more than ever, we need to recognise and acknowledge those who advance the values of our nation and act as a check on institutions of power.”

The VJOY team would like to pay tribute to 2021 judge Phindile Xaba, former Sowetan Women Editor, who tragically passed away earlier this year. Phindile left an indelible impression on her VJOY colleagues and friends – may her beautiful soul rest in peace.

Awards are given across 12 categories: Live reporting & breaking news; Investigative; Opinion; Lifestyle; Features; Photography; Sport; Financial & Economics; Politics; Sustainability, Innovation in Journalism and the Young Journalist of the Year Award. The VJOYs also give a Lifetime Achiever Award each year. Each of the five regions has finalists selected, who then compete at the national finals. For more information on category descriptions and requirements, visit https://journalist.vodacom.co.za

Journalists must enter their best work produced between 01 August 2021 and 31 July 2022. Entries must be submitted online at https://journalist.vodacom.co.za, between 16 August and midnight on Thursday, 01 September 2022. No late entries will be accepted.