The Eastern regional awards for the 2017 edition of the Vodacom Journalist of the Year took place this evening (25 October) where journalists were recognised in 12 categories for outstanding work. The theme for the awards this year is ‘Your Word’ and promotes the integrity of journalism across all media. This year’s competition drew over 1 000 entries from all over the country, including 141 entries from the Eastern region.

Convenor of the judging panel Ryland Fisher says: “The entries across the 12 categories were excellent this year. Our criteria for judging is to look for entries that could possibly make the cut for the national finals, and the overall prize of R100 000 for the journalist of the year award. As always, the work submitted from the Eastern Region was outstanding, covering a diverse array of stories.”

At a function held at the Protea Hotel Marine in Port Elizabeth, winners in the Regional categories each took home R5 000, with the exception of the Young Journalist of the Year regional finalist, who received a certificate. All the regional winners go through to the national awards in Johannesburg on 16 November 2017.

Takalani Netshitenzhe, Chief Officer for Corporate Affairs at the Vodacom Group, says: “We are delighted to announce the Eastern regional winners in Port Elizabeth for the 2017 Awards, which honour journalists from around the country by recognising their best work from the past year. We look forward to welcoming them at the national finals.

The winners of the 2017 Vodacom Journalist of the Year Regional Awards in the Eastern region are:

A number of excellent Radio News stories emerged from this region during the past year, raising the bar high. For the excellent standard of a group of stories on police brutality, the failure of the provincial education department and the closure of a number of schools, the regional winner is: Yanga Funani of SABC Radio.

The standard of work entered in this region for the Radio Feature category was exceptionally high this year. After long deliberation, the judges decided that the award should be shared by two entrants. For their outstanding collections of entries, including stories on the drought in the Eastern Cape and the sins of a Nigerian pastor, the regional award for radio features is won jointly by three SABC journalists: Veronica Fourie AND Jayed-Leigh Paulse and Iviwe Poti.

Whatever the reporting beat, when something appears too good to be true, a little bit of digging goes a long way. This was the approach taken in the outstanding collection of Sport reporting entered by the regional winners: Michael Kimberley and Kathryn Kimberley of The Herald for “Kings Saviour’s Web of Lies”.

Water quality and availability have been increasingly urgent themes of CSI/Sustainability entries. This specialist category requires in-depth reporting and the judges were pleased to note how the regional winner combined sustainability issues with well-honed investigative skills. For an investigation into the impact of drought on the Eastern Cape that contrasted an elderly resident’s survival creativity with municipal tenders that cut corners and neglected oversight, the regional winner is: Bongani Fuzile of the Daily Dispatch for “Eastern Cape drought disaster”.

The region’s winning Print News coverage produced up-to-the-minute reportage of the fires ravaging the Eastern Cape from a newsroom filled with smoke, as well as reporting from the blazing flames. The judges applaud: “After the inferno” from The Herald and The Weekend Post team of Gareth Wilson, Shaun Gilham, Lee-Anne Butler, Hendrick Mphande, Riaan Marais, Gillian McAinsh, Angela Daniels, Yolande Stander and Tremaine van Aardt.

Efficient agriculture is central to feeding the nation and nobody denies that we need to ensure that black farmers transform the sector as well as help relieve the pain of poverty through self-production of food. When Land Affairs and Rural Development Minister Gugile Nkwinti reached Krugerspost outside Cookhouse to promote government promises of assistance to black farmers through schemes such as one family one hectare, he discovered that communities had become hostile to promises that had not been kept and soap-box speeches that do not translate into change in their lives. The Print Feature regional winner is: Riaan Marais of The Herald for “Little reaped from promises sown”.

This specialist category rewards excellent in-depth reporting in any medium and the winning entry highlighted how national economic planning can translate into unexpected outcomes and conflicts on the ground. Our winners interrogated the accepted split of opinions on the N2 toll road development, revealing instead broken promises, lack of community consultation and the day-to-day reality of appalling rural service delivery in a TV feature. The winners are: Iviwe Poti and Cwenga Mgubasi of SABC News for “Proposed new toll gate”.

Our regional Photography winner enhanced the news value of the image by well-controlled usage of light, despite the intensely stressful working conditions when devastating fires in Nelson Mandela Bay destroyed kilometres of natural vegetation and threatened many homes. For creatively capturing the exhaustion of the brave firefighters against the backdrop of the runaway fires, the winner is: Eugene Coetzee of The Herald for “Daunting task”.

Part of the evolution in Television News in the past few years has been the growing skill of broadcasters to do effective, fluid and authentic live crossings enhanced by intuitive camerawork. These elements were used by our winners to dramatic effect in covering the extraordinary story of the Knysna fires. The regional winners are: Janine Lee, Gcobani Blom and Markus Brenner of SABC TV News for “Runaway fires”.

The range of stories making our TV feature shortlist was intense. There was one of South Africa's most tragically regular stories, women and underage girls sexually assaulted and raped; but this time the crime is clothed in religion – the perpetrator someone who supposed to be trustworthy. There was a new horror – killers who suck the blood of their victims and the community who took justice into their own hands to stop this. And there was an in-depth look at perennial taxi warfare, particularly how it causes the gruesome deaths of innocent people. All these programmes were well researched and told from the point of view of the people most affected by these horrendous crimes in their own language, isiXhosa. They were also all the work of one journalist. For this collection of work, the regional winner is: Ntsiki Nohiya, Sam Msibi, Buyani Mthembu and Sinentlahla Mhlongo of the SABC's Cutting Edge.

The winner in the region gets a certificate and goes through to the national round to compete for the overall prize. The overall award provides an opportunity to fast track a young journalist’s professional and personal development through an all-expenses paid overseas trip that includes a visit to the renowned Thomson Foundation, as well as the opportunity to work in a newsroom. To enter this category journalist should have worked in the media for up to, but not more than three years, and be able to demonstrate their potential through their entries. The winner is Deneesha Pillay from The Herald. 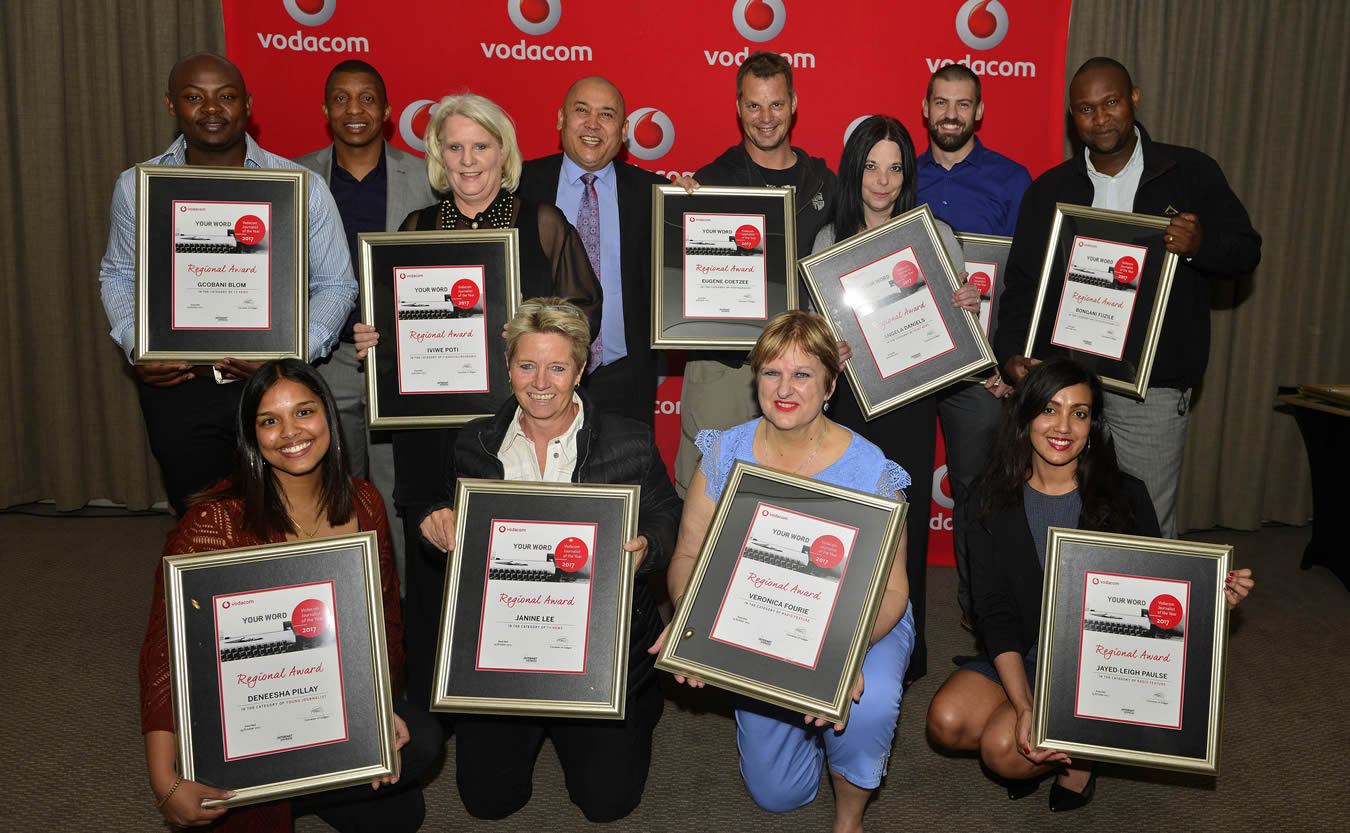